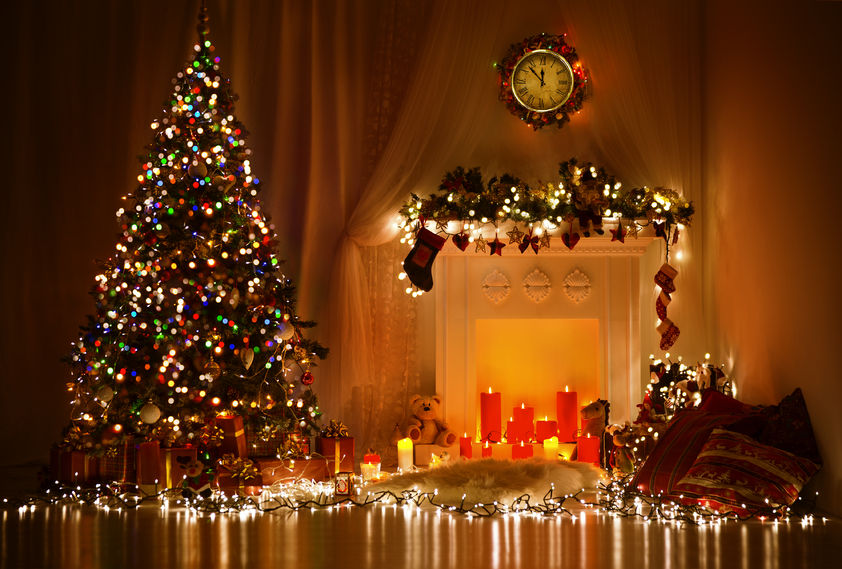 I usually start the holiday season with grand plans like I’m going to get the tree up before the end of Thanksgiving weekend, I’m going to make 80 batches of cookies and create custom plates for all the neighbors, I’m going to put up enough lights to show up on a Google satellite picture, I’m going to write an epic family letter for the 200 Christmas cards I’ll send out, and I’ll have all presents wrapped and under the tree by the 19th so that I can enjoy my birthday and my girls.

The tree was bought and brought home on the 19th and we got lucky, really lucky.  Home Depot had zero trees.  Armstrong Garden Centers had zero trees left, and our regular tree lot on Saxony was completely sold out last week.  The trees that were available were thin, scrawny, and burned.

I always want to get the Christmas tree early but my husband never wants to get one because he’s afraid it will be dead and smelling bad by the big day.  And because Christmas falls on a Monday this year, we would have to hang on to the tree until Saturday when the trash gets picked up.  I understand his concern but that’s part of the charm, the romance–the stinky, decaying tree.

We managed to find an acceptable tree at a distant lot; the guy had 10 trees left, maybe 12.  In what is typical for us, we all liked different trees.  We finally settled on one in which we knew we would have to rig a perch for the angel.  We knowingly bought a tree with our money that needed rigging!  Fortunately, the tree lot attendant was nice and he followed us home with the tree in the back of his truck.  We have cars that aren’t suitable for bringing home trees with stands attached to them.  But, really, does anyone have a car that could handle a tree with a stand attached?

The decorations didn’t go on the tree until my birthday on the 20th while I was out getting a much needed massage and facial.  I must admit that it was nice to come home and have the tree all decorated.  I might be one of the very few people who hates putting the decorations on a tree.  I don’t know what it is about it that makes it right up there with cleaning the toilets but it’s a chore I don’t adore.

I did manage to get some outdoor lights up but not the usual amount and I have not gone back to add more.  At this point, I’m pretty sure no more are getting out of their totes.

I have bought many presents but none are wrapped.  Not a single present is wrapped.  I need shirt boxes and I know with a certainty that there aren’t any more available on store shelves.  I’m going to go to Wal-Mart, Target, CVS, and various other stores and they’re not going to have them.  I know this and I will be stuck putting clothes in bags so we’ll have a lot of bags under the tree.  To me that looks lazy.

Not only did I not write out a single word of my “epic” family letter but I did not send out a single Christmas card.  And now that it’s the 22nd, there’s no chance that a card will make it on time to anyone on my list.

Baking?  I made a cheesecake for Thanksgiving but that was my last episode of baking.  Everyone else in the family has baked a lot.  Me?  Not a single speck of wet cookie dough has touched these hands.  I guess the neighbors will each be saving several thousand calories.  You have to find the silver lining in everything even if it’s lame.

I’m not prepared; it’s like I’ve lost all interest in Christmas this year.  I truly wish Christmas would just pass quietly like all the rest of the holidays.  It’s supposed to be the most fun, the most romantic, the most beautiful time of the year, but it’s only been more of the same daily life but with lots of added pressure.

2017 has not been the best and it looks as if it will end the same way.  Join me in wishing for better things in 2018.  I don’t know how I’m going to make it better, but if I don’t commit to making it better for myself, who will?

2 thoughts on “It’s the Most Wonderful Time of the Year?”